♐LONE is a video posted to the second YouTube account on March 26, 2016. It was posted the day after ♐ZUFCHO, during a busy period for UFSC that included ♐WINGSET, ♐RETIO and ♐LIMIT (as well as the ♐CAB and ♐MUL series on twitter).

The video is 1:20 in duration. The image is primarily black, with some pulsating purple pixels.

It contains a mono audio track of heavily-distorted sounds, including the Handshake. ([https://www.youtube.com/watch?v=zl5K7Xs9jtA| Noise reduction] can reveal some of the sounds behind the distortion.)

Discord user Risto notes that ♐LONE “has a nice and clear handshake at 490 Hz, both at the beginning and end”: 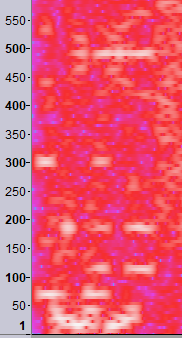 Risto notes, “there is a fragment of what could be a voice, but that would require denoising.”