The word “port” has multiple meanings, but most interestingly it could refer to: 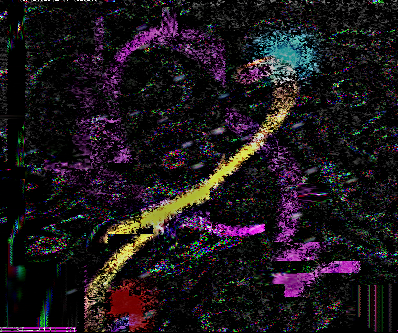 User unstable olding noticed there are “dots and dashes” (similar to ♐DEPTH) in the top left corner that could be Morse Code:

This has been decoded by discord user ShadowMorphyn as “NDMTEGD”.

There appears to be a string of letters and numbers in the bottom left corner:

There is an intermittent high-pitched tone throughout the audio track. Visual analysis of the spectrogram shows 28 such bursts:

(An audio sample with those high frequencies removed can be heard here.)

Also of note is that it appears that all audio frequencies above 13000 Hz have been cut.

Underneath that high tone and throughout the track is a sputtering stereo track with almost musical features that may or may not be looped throughout the duration of the file. Near the end of the track, there is the normal audio but with a higher pitch.