The video is 27:25 in duration. It contains a stereo audio track of buzzing electronic noises. It was noted the beginning of the video contains faint “music” like sound similar to that of DELOCK and RETIO. The visuals contain a series of frames.

Discord user ahiddenwaffle has noted that there are “sections” in the audio, with gaps of silence roughly every 8 seconds.

The composite of RELOCK is very similar, but not identical, to LOCK. 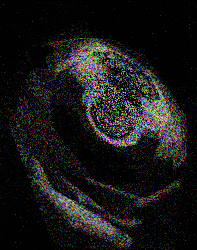 This animation shows the difference between the RELOCK and LOCK composite. RELOCK has additional noise in the background, and in LOCK many of the pixels extend one pixel to the right.