At 9:43:20 (35000 seconds), this is one of the longest videos posted by Unfavorable Semicircle. The visuals contain a flickering series of monochrome frames.

The audio is a mono track with a variety of data transmission type sounds throughout.

The audio is a mono track with heavily-distorted spoken words. It is difficult to confirm if it is the Unknown Voice or not.

Discord user ErasablePotato has observed the words sound like the NATO phonetic alphabet, as used in HFGCS messages. (sample)

The audio has a distorted Handshake at the start and at the end. Discord user Risto has observed that that creates one half of the “Pisces symbol” in the initial Handshake, and the other half at the end:

♐RAPID was posted on November 11th, known as Veterans Day in the U.S.A. and Remembrance Day in Commonwealth nations. It’s worth noting that many non-series videos were posted on holidays, such as HARVEST being posted on Canadian Thanksgiving and BRILL B being posted on Valentine’s day.

There is some variability in the alignment of the image depending on the width used in constructing the composite. Here is the composite with a width of 497 instead of 498 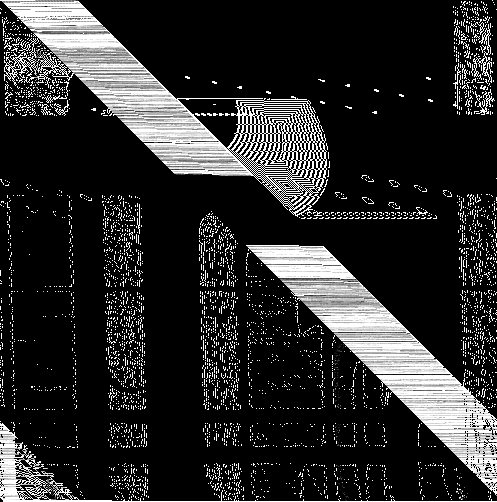